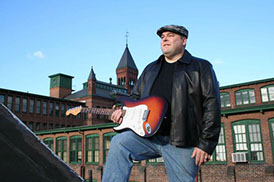 Born in Waltham in 1961, Alan Arena wrote his first song "Doing 110 at 3 AM" in 1978, when he was 17. In 1994, Alan started the Watch City Band, which now goes by the name the Watch City Blues. Watch City is a four piece band playing original songs and covers including Blues, American Roots Music, Americana, Jazz and even Rural Country.

Watch City's live show is upbeat with intoxicating rhythm's and strong back beats, and songs that you swear you heard on the radio. With a new Cd "Fortune Wheel" coming out soon. The Watch City Blues is on top of there game and ready to entertain you. Catch the Watch City Blues Live and you'll be a fan.